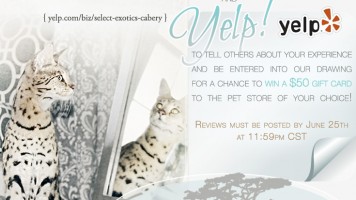 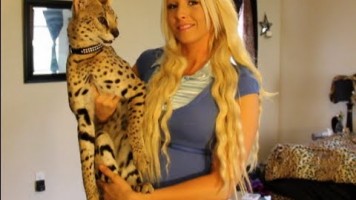 Zeus the Serval: Why the Savannah is a Better Choice

Savannahs on Jackson Galaxy’s “My Cat From Hell”

When I saw an advertisement for Jackson Galaxy’s “My Cat From Hell” with a Savannah, my heart sank. I was instantly concerned about the breed receiving negative publicity and how that could affect future ownership laws. At this point there are some states that have ownership restrictions, but for the most part they are legal in the US. However, there is legislation getting passed in some areas with general “hybrid” animal bans. In most cases this legislation is targeting the wolf hybrids but the verbage is not written specifically and the Savannah can also be caught in the crosshairs.

To my delight, I thought Jackson did a very nice job identifying the root of the problem with Jacques’ two Savannahs, Morello(F2) and Darwin(F5), and gave suitable advice to diffuse the bad situation. The root of the problem was boredom and lack of mental stimulation. The Savannah is an extremely intelligent breed that requires more interaction that your typical domestic. Although more user friendly than a dog in regard to their ‘bathroom’ needs, Savannahs are quite similar to dogs in that they look forward to their owners returning home and are often waiting by the door, ready for a play session. Many owners report their Savannah will play fetch “until it feels like my arm is going to fall off!”

Jacques ended up bringing a pet sitter in during the day while he was at work to have an additional play session, in addition to the hard play session he would have with them before leaving for work in the mornings and upon arriving home in the afternoons. This is an extreme requirement and this is rarely necessary for the breed. We have found that the Savannahs quickly tire of a toy and it requires a new toy to provide the same stimulation. We recommend a plethora of Savannah-safe toys be employed, but that only one or two be available at a given time. Rotating through a wide range of toys increases one’s ability to keep their Savannah stimulated and interested in play.

Jackson Galaxy also employed the use of wall shelves and perches for Morello and Darwin. I have seen him do this for many of the cats he helps, but feel it was especially important for Morello and Darwin. Savannahs enjoy being able to take things in from a safe vantage point before deciding to join in on the fun. Providing these spaces will lend to a more comfortable, well-adjusted Savannah.

Jacques also had a problem with Morello being antisocial and even aggressive towards visitors. Through the use of positive reinforcement in the form of food treats and play, Jackson Galaxy and Jacques were able to conquer Morello’s fear of visitors to the home. In a perfect world Morello would not have had this fear in the first place. However, when dealing with living creatures we find that each has its own quirks. In order to try to prevent such behavior in the Savannah we recommend exposing Savannah kittens to as many people and new situations as possible as they mature. The more they are exposed to at a young age, the more accepting they will be of new people and situations at maturity.

So kudos to Jackson Galaxy on a great episode of “My Cat from Hell” and for a job well done with helping Morello and Darwin reach their full Savannah potential. I hope this episode proved helpful to any other Savannah owners experiencing similar scenarios.